The story of Cinderella is told with a Kiwi twist.
Cindy's Fairy God-Mum turns a kumara into a grunty V8 so that Cindy can attend a barbie at the home of the local hunk, Peter J. Prince.
Cindy loses her sparkly jandal, and Peter is desperate to find its owner.

This was my first picture book to be published. I actually wrote it in 2006 and sent it into several publishers, including Scholastic. Over a year later, after having resolved myself to the fact that my writing wasn't good enough to be published, I received a phone call from Scholastic to say they wanted to publish my story to launch their new 'Kiwi Corkers' series. Much excitement! I had no idea what the publishing process involved and so began my big learning adventure. It wasn't until April 2009 that Cindy was running around the bookshelves of New Zealand in her sparkly pink jandals!

Cindy and the Lost Jandal was launched in April 2009 in Taupo. It was my first public appearance as an author and I was TERRIFIED! I had thought that once you had your book published, that was the end of the matter, that everyone else in Publishing Land stepped in and promoted your book while you sat at home eating chocolate and counting your royalties (HAHA).

Another Snippet Behind the Story

As Kiwis, all our 'flip-flops' or 'thongs' are called JANDALS, whether they are authentically labelled Jandals or not. However, 'Jandal' is actually a registered trademark. So, in order to use the word 'jandal' in our story, the publishers had to obtain authority from Sandford Industries Ltd, who hold the registered trademark. There is a paragraph on the Indent page, thanking them for their permission to do so.

Having spent many a happy hour reading the original versions to my eldest kids during their youth, it was great to see a real Kiwi twist in this one as I read them to some of the younger members of the clan. This story in particular was really Kiwi, with a kumara instead of a pumpkin, diamond-encrusted jandals, and a funky miniskirt instead of the ballgown... read more
KIWIreviews

Find out how much do you know about 'Cindy and the Jandal'?

Print off and make your own bookmarks. 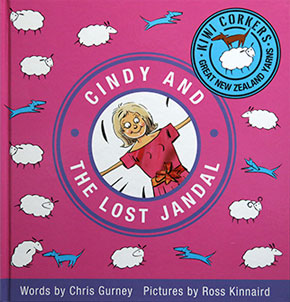