"Esau the Paw was a very cool cat.
No cat was fluffier, be sure of that..."
But what happens when long-haired cats' coats get too matted to brush? Yep, they get clipped, much to Esau's embarrassment - and disgust!

Esau the Paw is based on a true(ish) story of my own cat Chevy. Chevy is a very fluffy Persian cat, who has never realised that very fluffy Persian cats are meant to be INSIDE cats, not OUTSIDE cats. I do realise, as his Very Tall Mother, I really should call the shots here. But the thing is, when Chevy wants to go outside he meows and pesters and scratches, glares and tries to trip me up, until his persistence pays off and I'm glad to see his furry butt strut out the door. So inevitably, by the end of winter, Chevy's tale is exactly the same as Esau the Paw's tale!

Till one day his Very Tall Mother exclaimed,
"The state of your fur's a disgrace and a shame!
I simply can't do it!" she cried, looking grim.
"Esau the Paw, it is time for a trim!"

His very Tall Mother was full of compassion,
And bought him a jacket, both warm and in fashion.
But Esau the Paw felt silly and sappy.
Being dressed like a poodle made him unhappy.

Chevy is actually a very good natured and affectionate cat.
Despite appearances ...

And he's even opened a school library, so he's a bit of a celebrity as well!

Esau the Paw is a very fluffy cat, and very proud of his full fur coat. He also likes to explore the great outdoors, rolling through mud, climbing trees and squeezing under bushes. Unfortunately all that outdoor fun leads to many tangles and knots that just can't be brushed out. A quick trip to the vet and Esau finds himself with rather less fur, and is highly embarrassed by it. Will it ever grow back?... read more
Today We Did

Esau the Paw is a cat is like a big bloated fur ball. He struts and stalks as he checks out his domain. He often arrives back home to his Very Tall Mother in a bit of a mess. She patiently brushes out the knots and bothersome bits... read more
Booksellers NZ

The other day while we were at the Scholastic Book fair at school, my daughter spotted this book hiding on one of the shelves. All she could see was Esau the Paw hanging off the "E" on the cover. I could see Chris Gurney's name on the cover as well, so we pulled it out from behind everything. The cover isn't terribly bright, but it stood out on the shelf with it's pale yellow and the friendly looking cat... read more
KIWIreviews

For those of you who "own" (as if cats can be "owned") a Persian cat, this picture book will resonate. What with biddy bids and fur balls, the challenge of looking after a long-haired cat is not for the faint-hearted... read more
Reading Time 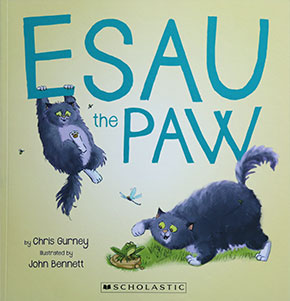