In this version of the Grimm Brothers' 'The Frog Prince', Kiri kicks her prized rugby ball into the creek.
It is retrieved for her by Archey the frog, who in return demands to sit on a soft pillow, eating chocolate fish and watching rugby on the big-screen TV!
Kiri's annoyance turns to surprise then joy, when, in the excitement of winning the game, she kisses Archey and he turns into an All Black! 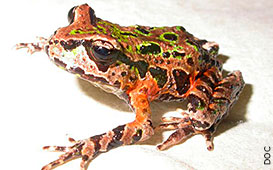 I needed to research more NZ native creatures before writing the Kiwi version of 'The Frog Prince'. I was pleased to discover that New Zealand does in fact have four species of native frogs, the smallest of them being the Archey's frog. It has several distinctive features, which make them very different from frogs elsewhere in the world. They have no external eardrum. They have round (not slit) eyes. They don't croak regularly like most frogs. They don't have a tadpole stage (instead the embryo develops inside an egg, and then hatches as an almost fully formed frog). The young are cared for by their parents – the male Archey's frog carries his young offspring around on his back.

The Frog All Black

LISTEN to 'The Frog Footy Player' as told on Storytime Radio...

Another Kiwi Corkers title, this is a very New Zealand version of The Frog Prince. Youngsters might not know the original story as well as they know the Goldilocks one, but it's still an entertaining read. Kiri's lost rugby ball is returned to her by a frog called Archie... read more
Kids books NZ

Judging the book purely by its cover the majority vote from the group was that it was likely to be a story that perhaps the 5 -6 yr olds would love and not cool for anyone else. By the time the first three pages were read, wider appeal was obvious with a drop in the noise level, a decrease in the jiggling and wriggling of bodies and some older children, snuggling in closer to get a good look at the illustrations... read more
Booksellers NZ

I have never read the Frog Prince to my son before so decided not to share the real version with him until we had read this one. This story has been cleverly written in rhyme which was very appealing to my son. Every page he was repeating the words that were rhyming and there was plenty of rhyme - great for a teacher to use in a classroom. Throughout the whole story my son was fully engaged in the words and illustrations. It was great that he was able to pick up how the characters were feeling. My favourite part however was when I read about the frog turning into a football player. The look on his face showed how engaged he was in the story... read more
KIWIreviews

A story that relates well to children who already have an interest and connection in their own lives to rugby, nature, farms, mud, food, fishing, family and our mighty All Blacks. Such strong connections creatively threaded together in rhyming, witty words are this book's real strength... read more
Info Media

Help Archey find his way from the creek to his soft pillow at Kiri's house! 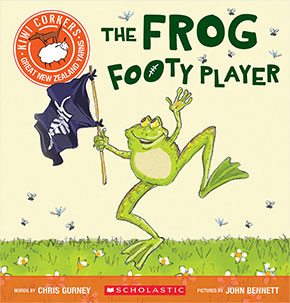