Browsing through her recipe book, the Little Blue Duck decides to make that great kiwi classic, a pavlova! But Tui, Kea and Weta are no help at all, leaving Little Blue Duck do all the work so when the time comes to eat the pavlova, there's no prize for guessing who is not allowed any! Kiwi retelling of The Little Red Hen.

What Lies Beneath Exhibition 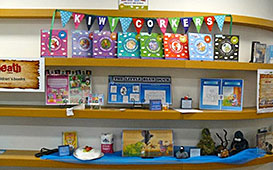 During February and March 2014, I was part of the What Lies Beneath exhibition at the National Library, Parnell. The exhibits provided a chance to visually see what goes on behind the scenes, as a book evolves. I promoted the 'Kiwi Corkers' series in general, and in particular the book 'The Little Blue Duck'.

For teachers, you will be able to download an information and classroom activity sheet pertaining to this exhibit. This is a good opportunity to do some research into the native Blue Duck and other native NZ creatures.

Some fun facts about the Blue Duck (Whio) 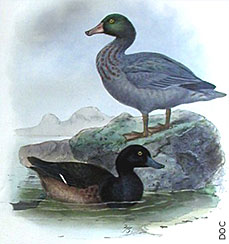 Whio are only found in New Zealand

Whio live in one of the most challenging environments in the world - a fast flowing river!

They have a lip on the end of their bill to protect their bill when feeding for aquatic insects amongst the rocks.

They are perfectly camouflaged - they are blue/grey in colour and look just like a rock!

They have big webbed feet for swimming in the rapids - even day old chicks can negotiate the biggest white water - born to surf!

Whio are feisty - don’t mess with them. They defend their territory from other whio and even other ducks on the river.

So Whio cannot be kept with other species of ducks in captivity, because they fight too much.

Listen to the sounds the Blue Duck makes - as recorded by the Department of Conservation.

See these facts and more from the Department of Conservation.

Rats are introduced pests which threaten the long-term survival of native species. They include the Pacific rat/Kiore, ship or common rat and Norway or brown rat.

Kiore, introduced by early Maori voyagers, predate rare weta, snails, frogs, lizards, tuatara, birds and bats, as well as other insects and the flowers, fruits and seeds of plants.

Ship rats and Norway rats also eat any small animals and plant material, including the adults, eggs and chicks of many rare birds.

Three pages in my daughter clicked and said 'hang on a minute this is just like the little red hen' and then quickly told her younger sister and myself all about it and what happens. She was rather excited about the fact that she was basically correct, except for the kiwi angle that is. I love New Zealand made books the illustrations are fantastic and so relatable and having New Zealand animals involved really sealed the deal... read more
KIWIreviews

A retelling of The little Red Hen, this has a true kiwi flavour. With such New Zealand icons peeking out in the illustrations such as the Chelsea Sugar, among others. Stevie delights us with cheeky bright illustrations married with Chris's lovely rhyming text makes this a fun read... read more
The Patient Dreamer

Of course they come up with every excuse under the sun as to why they can't help - that is, until it's time to eat the finished product! A fun, entertaining read. This book has wonderful, vibrant, eye-catching illustrations which adults and children will enjoy time and time again. ... read more
Otago Daily Times

What Lies Beneath Exhibition Teacher's Resource.

Facts and links about the Whio - Blue Duck.

Facts and links about the Whio - Blue Duck.

Listen to the sounds the Blue Duck makes - as recorded by the Department of Conservation. 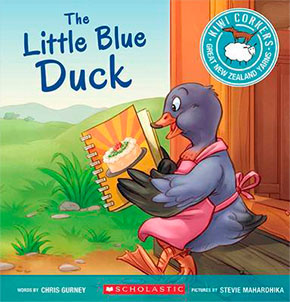