Madison Moon and her hot-air balloon, each day floated off in the sky. Topsy and turvy, ziggedy-zag, what fun could be had up so high."

Tired of the stress of being stuck in traffic, Madison Moon buys a hot-air balloon and takes to the skies. But when everybody else decides to do the same, she goes back to her car, leaving them to fight for space in the wide blue yonder!

Colourful illustrations by award winning illustrator Catherine Foreman. Her depiction of all the various balloons in the sky, brilliantly captures children's imaginations.

Sarah Anderson (illustrator) and I were in Hamilton promoting our new book 'Hester's Blister'. The owner of the bookshop at which we were based, made a passing comment about how few children's picture books there were about hot air balloons. She said she was frequently being asked for them each year around the time of the event 'Balloons Over Waikato'. And why didn't I write one?! So, I pondered over that idea for some time before coming up with the story 'Madison Moon and the Hot Air Balloon'.

Balloons over Waikato is New Zealand's premier hot air balloon festival. Held annually, in Hamilton, this five-day event attracts balloonists from all over New Zealand and around the world. Find out more about this festival and see pictures of the balloons.

The story uses a lot of onomatopoeia (a word which imitates the sound it describes). This can be used as a tool to recognise the onomatopoeia throughout, and encourage children to use it in their own stories.

Chris Gurney's text is fun to read, with lots of whooshing, swooshing and blabbety-blabbing. You get caught up in the rhythm as you read and get taken on a wild ride through the air. Catherine Foreman's illustrations are bright and colourful, and filled with lots of different patterns and shapes, especially the balloons. Madison Moon and the Hot-Air Balloon will really appeal to children, because it's taking something ordinary (traveling from one place to another) and making it extraordinary... read more
My Best Friends are Books

Living in Hamilton the kids are used to seeing hot air balloons in the sky and we are very fortunate to have an annual balloon festival too. When I saw Madison Moon and the hot-air balloon I knew that they would love it. I was right. It is now a favourite with all the kids. The four year olds loved the storyline more than the younger ones probably because of the language used. It was Margaret Mahy style writing with the descriptive words. The words had a beat and rhyme which I found myself getting caught up with. My home-based care kids and my own preschoolers all loved the different balloons. It was very cleverly done and there was often a second story being told by the balloons themselves. The children loved the shark balloon chasing the fish. My favourite was the police chasing the robber in his clearly identified balloon... read more
KIWIreviews

Hot Air Balloon science activity – learn how and why air expands when it is heated up..

Onomatopoeia is a word that imitates the sound that it describes.

An easy way for children to remember how to spell the word. 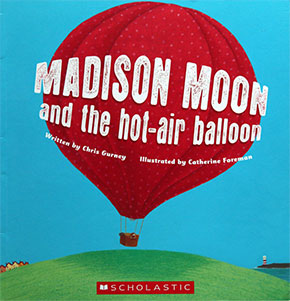