Get me some ugg boots to warm up my feet,
plus a flax kete, and all will be sweet!

Poor Pete. His best mate is a pet parakeet. But that fine-feathered, fancy-footed fast-talker is no ordinary bird, and soon life is sweet for Pete!

Based on Puss in Boots, the Parakeet in boots does much the same sort of thing. He helps his friend Pete trick the Big Boss into thinking he is the Pongatown mayor, who is rich and impressive, in order to win the hand of his daughter. As it happens, Pete couldn't let the trickery go on and confessed to everything. But the Big Boss could see how his daughter looked at Pete and agreed to the marriage anyway, as well as retiring and giving Pete his business.

What are Ugg Boots? 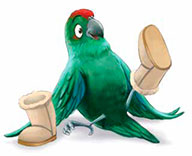 Australia and New Zealand both claim to be the original home of ugg boots!
For decades, local traders used the name 'ugg' to describe their product, - which legend has it – dates back to the days when shearers wrapped sheepskin around their feet to keep warm. Sheepskin boots have long been popular with people in rural occupations, such as shearing, who have ready access to the raw materials.
The boots became popular in the 1960s, when surfers began using them to keep their legs warm while out of the water. Ugg boots marched back into fashion during the past decade. Now everyone seems to be sporting the boots, including Hollywood celebrities.

I wrote a version of this story quite a few years before Parakeet in Boots was published. The original version was called "Bug in Uggs" and starred a Huhu bug as the "Puss in Boots". Needless to say, this was stretching the imagination a little too much for the publishers, so it was rejected. Five years later I hauled the uggs out of my filing cabinet and put them on handsome Parakeet's wee feet, and suddenly the story worked and transformed into a book.

This book had the shortest 'brewing' time I've ever experienced with the books I've had published. I wrote the story in February 2016, had it accepted in March and it was on the retail bookshelves in November. This was because Scholastic was actively looking for another Kiwi Corker to follow up the previous popular story "The Three Cattle Dog's Gruff".

Interesting Facts Behind the Story

Kakariki feed on berries, seeds, fruit and insects. It is not unusual to see Kakariki searching for food on the ground.

Kakariki are usually solitary or found in pairs, although in autumn and winter they may form small flocks.

In flight they make a loud rapid chatter that sounds like 'ki-ki-ki-ki'.

Watch a short video of the Parakeet, or Kakariki.

'Soon Parakeet came to cow-cocky Fred,
herding his cows to the herringbone shed'

What is a herringbone milking shed?

These are kind of shaped like a fish bone and cows line up on either side, where the bones would branch out from the spine. The farmer stands in a sunken pit in the middle. Here is a cool animation of how a herring bone shed works. (Source Dairy NZ) 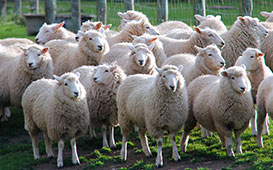 'The parrot flew on, finding sheep farmer Jane,
With her big flock of sheep on her huge grassy plain.'

Who brought the first sheep to New Zealand?

What was the first breed of sheep brought to New Zealand in large numbers?

Scholastic have produced this book for a very realistic price, knowing how stretched families are at this time of year – a fun stocking-filler!... read more
Bookrapt

I really like the Kiwi Corkers range of fairy-tale retellings with an NZ flavour. This would have to be one of the most delightful: how can you not be charmed by a kakariki in ug boots? Of course, the story line is a little prone to exaggeration and outright lying - in the spirit of the original tale it's based on, of course - but at least the young "mayor" admits his pretenses in the end, and still gets his happy ending... read more
Goodreads

A rather unique take on a classical fairy story. Both our 2 granddaughters were mesmerised by the idea of a parakeet taking charge of Pete's destiny. I kept thinking of the parrot wearing ugg boots and wondering how on earth he could fly in such cumbersome things... read more
The Reader

Print this template and make a face mask of Parakeet.

Print this maze and help Parakeet find his way back to his nest.

Print this colouring sheet, and colour in Parakeet's beautiful feathers. 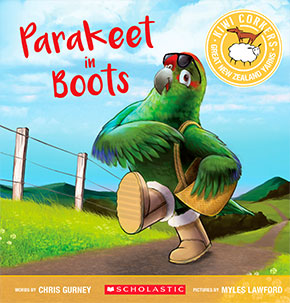